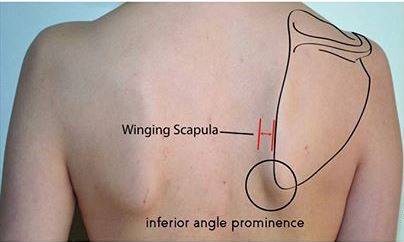 Scapular Dyskinesia: an often neglected cause of Neck Pain

One of the causes that lead to neck pain is Scapular Dyskinesia.

The term “Scapular Dyskinesia” refers to the abnormal resting position of the scapula or/and its abnormal movement during arm elevation.

When we elevate the arm to perform an overhead activity, e.g. to place an object on a high shelf, the scapula rotates upwards, supporting the arm (pic. 1).

In some cases, the muscles that move the scapula and stabilize the shoulder, are “inhibited or don’t activate early enough”. The Nervous System, in its attempt to maintain the functionality of the arm, “hyper-activates” certain muscles, which produce pain (pic. 3).

There are various “dysfunctional patterns” in the resting position and movement of the scapula. The most common ones are the following:

All the “dysfunctional alignment and movement patterns” are non-economical. When the movement is not a result of a balanced contribution of each muscle, some muscles work “overtime” to compensate for the inefficiency of their neighboring muscles. As a result, they develop painful trigger points, they become sore and produce pain in the neck region (pic. 7)

It must be noted that Scapular Dyskinesia is not always related with Neck Pain as a causative factor. Some postural and movement deviations are part of the body’s normal variability, and do not cause painful or other symptoms.

This is easily detected by specific clincal tests performed by the therapist. If, for example, a movement of  the neck that produces pain, stops being painful when the therapist corrects the position and motion of the scapula manually, then we reasonably assume that the treatment of Dyskinesia will have a positive influence on the painful symptoms (pic. 8).

When a causal relationship between Scapular Dyskinesia and neck pain is established, then it is necessary to include a stabilisation program with specific exercises for the scapula (pic. 9).

The various soft tissue techniques (massage, myofascial release, acupuncture etc.) provide only temporary results, because they don’t treat the root cause of the problem, but rather the secondary result.

A comprehensive and successful approach should include the relaxation of the stiff and painful muscles, to provide instant relief, but also the selective activation of the weak scapular muscles, in order to interrupt the vicious cycle.